“Man of the House”

MAN OF HIS HOUSE (The Backdrop)

The power of a father’s voice is unparalleled. Whenever my dad would leave the house when I was a kid, he would say these simple words to me, “You are the man of the house while I am gone!” For a young boy, an apprentice to his dad, those words carried weight and dignity…even though he probably just meant taking out the trash and listening to my mom.

Unfortunately, the apprenticeship was short-lived. At the age of 7, that phrase became a reality. My father, on the way home from work, was hit by a train and died upon impact. A combination of missing road signs, the conductor not doing his job, and the desire to find a different radio station left a gaping hole in my family. Processing the death of a parent is devastating as an adult, so I obviously did not know how to respond at 7 years old. After crying for a day, I decided I needed to embrace my father’s charge and step up. I took his advice and moved on to being the “man of the house” without giving grief time to run its course.

Although I dismissed emotional responses, I carried an illogical sense of guilt. The last thing I remember telling my dad was “good night” which turned into my final words to him…forever. I always thought that if I would have said, “I love you,” he would still be alive. He would have left later for work, or came home early to see me, with either option changing his timing of crossing those train tracks. Shortly after to his death, I walked to my mom as she was crying and said “I bet you wish it was me” as I gave her a hug.

So much confusion, guilt, and grief. I eventually locked that potentially emotional and weak 7 year old boy away in a room. And throughout the years, as a means to protect that boy even more, I built a brick wall around him and put guard dogs in front. This was my way of keeping him safe; this world is way too harsh for him.

MAN OF MY HOUSE (The Event)

On the outside, I had a pretty normal and highly functional life. I graduated college, I married my amazing wife Nicole, created a great career in sales, and had a beautiful daughter, Naomi. All of this happened while avoiding emotions and keeping that 7-year old boy safe; as far as I could tell, there was no need for emotions in a man’s life. But as my family grew, so did my love. My vulnerability became apparent because as my love for them increased, so did my fear of hurting them or losing them completely. The boy’s voice was getting louder.

Jump to December 5th, 2015, almost 30 years after my father’s death. Marriage requires conversations, and some of them have the joy of being heated. When you are talking about parenting styles, and exploring the idea of discipline for the first time, it normally is not a great idea to have that conversation at 1am, after a few drinks. Processing your background, your personality, and your brokenness is hard enough when you are rested, so you can imagine that a great recipe for emotions was brewing. As emotions and exhaustion grew, Nicole posed the question: “What do you need from me to get our marriage better?”

After multiple attempts to avoid responding, I gave in and unloaded months-worth of thoughts that came out in an accusatory tone. Instead of progress and hope, I created a door-slam and tears in the bathroom. I had just failed…

This was why I didn’t want to respond. I knew I was not capable of a healthy conversation at that point, and I almost decided to roll over and go to bed. But I knew I needed to pursue Nicole. As I opened the bathroom door, I received a combination of words and a look that sent me spiraling. “How can you say those things to me? You are the man of the house! You can’t put all that shit on me.” The man of my house. There it was. 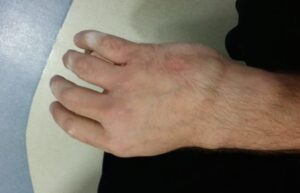 The 7-year old boy, locked away, could not handle the guilt of failing yet again and became uncorked. As he punched his brick wall to find fresh air, I punched my wall three times, unfortunately with extreme precision as I hit the stud every time. My hand was broken in multiple places and we were on the way to the hospital…the fight was over.

Reconciliation happened in the hospital. As our love took over and my wife’s forgiveness exuded, I felt a few more bricks fall. Private as this event was, and as much as I wanted to keep it locked away to protect that 7 year old, I realized this was a moment where God was speaking to me.

SURRENDERING MY HOUSE (The Invitation)

Although I knew there was work to be done in this area, the fear of the journey was always stronger than any desire. Naomi is the catalyst that is finally giving me the courage to walk the daunting and seemingly impossible path of engaging my heart and emotions. I desperately want to be a good father and husband, and punching the wall was my first step towards healing.

I knew exactly where this journey needed to start: freeing the 7-year old boy that has been locked away for years.

When I went through the 9-month Theodyssey journey, as well as the year-long leadership track (prior to breaking my hand), I experienced incredible breakthrough and growth in many areas: view of God, view of self, emotions. I was an open book, surrendered in every area. Except one…well, maybe a few, but one bigger than the rest.

Theodyssey pushed me a little closer to those guard dogs. I still remember the moment as I met with Dean Smith, an amazing psychologist, during the certificate track and the conversation turned to my childhood.

Yeah, I wasn’t ready. I don’t know if I am now, but my girls need me to be. I am tired of sitting outside this room, staring at the dogs and hearing his crying…that boy needs to come out. I can slightly see him thru the missing bricks from that night. He looks so tall.

I’m at the very beginning of the journey. I would not call this a story of success, freedom, or a public embrace of my tears. It is a story of brokenness, resistance, and fear, but also courage and learned trust.

I love my daughter more than I ever thought I could. And I don’t want to keep punching walls. 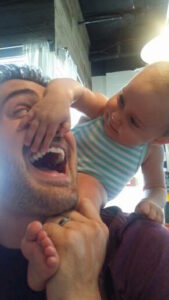 I have hope because I randomly feel moved and compelled, even if it is brief. And when I come home and hear “dada” behind those beautiful blue eyes, most fear of emotion and weakness are gone. I dance. I do illogical and crazy things. I cover her with kisses. I show her as much of my heart as I can. But I want more.

It is now time to address that 7 year old boy. Time to believe that God delights in that boy the same way I delight in my daughter. Time to know His love experientially and not just believe it intellectually. I have no clue if I will ever truly experience God’s delight because it feels so far away, but I am taking steps and learning to have hope.

I am not sure what this future of freeing the 7 year old will look like and I am scared beyond belief, but I am choosing to fight. Theodyssey helped me find the foundation. And now with the support of soul friends from that journey, along with the love of my girls, I am ready. They let me swear, yell and scream, and get pissed over nothing. But as they love me through those moments, one more brick is removed. The boy is seeing sunlight.