We are approaching the halfway point of Lent, which is unique season in our normal rhythm of life. There is so much possibility packed into this time of sacrifice and self-control, and what was once a discipline only found in specific denominations has spread more mainstream. I wanted to share a bit about what I gave up this year, and the reason behind it.

I gave up nothing this year. And I have been doing amazing at it!

I see one main goal for the Lent season, and although I may accomplish the outward goal of my “giving up”, I have never come close to reaching it.

For those that embrace the deep heritage of the season, the hope is to identify with the sacrifice that Jesus made for us. Our sacrifice will help us emotionally connect, and for some physically connect (in a completely disproportional way), to what Christ has done for us. It is the same concept of fasting, where the longing for food (or other pleasure) will be redirected into a longing for God. This is why I’m always drawn to Lent. There is something rich there, and I want it!

Yet I have rarely given something up for Lent and felt closer to an understanding of the Passion narrative as a result. I go into willpower mode and muscle through it so I don’t have to admit to anybody that I failed. I embrace all cheat days and look for obscure loopholes. I arrive at Easter in the same state (maybe craving beer or sugar more than normal) because I didn’t use the extra time to sit with Jesus. I just declared victory over my goal!

So as Lent approached this year, and I wrestled through the pressure to give something up, I made a decision. I’m not going to give up anything. But I’m going to pursue something.

I want to connect with God. I want to hear His voice and respond to His invitations. I want to remember His sacrifice on a daily basis so it reorients how I approach and perceive life. And I don’t want this to stop at Easter.

I realized I had to take my focus off of what I was giving up, and turn it to what I was embracing. And when I focused on what I’m embracing, it would obviously require I give up things that are in the way. But the giving up is no longer the focus.

If I want to create space to invite God to speak to me, it means I have to give up some time on the phone reading pointless articles. It means giving up the time I spend trying to possibly comprehend how Trump is winning in the polls. Its giving up my mornings in the comfy chair that lull’s me into a very sleepy, transcendent time of “prayer” and replace it with a Bible at the kitchen table. It is giving up whatever is in my way of connecting with God.

Regardless of your participation in Lent, I want to invite you to create space for God. Can you create 10 minutes a day where you sit in silence and ask God, “What do you want to say to me today?” 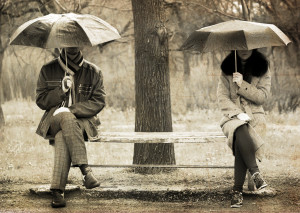 There is an incredible risk with this question, especially when we have never had this daily practice. Many of us won’t hear anything! It will feel like a failure! We tend to abandon these endeavors so quickly because spiritual disciplines are supposed to produce something. Whether it is tangible differences in our character or decisions, or just an emotional response, we want to know whether “it” is working! We want results.

What if we stay in it, believing that God wants to speak to us? Are we okay with only hearing something 2 or 3 times in a month? Would we celebrate the fact that it is 2 or 3 times more than we would have without creating that space? Or would we view it as a failure because it doesn’t seem efficient?

Just like communicating with my wife, or really growing any relationship, it takes time. For many, just creating the space and allowing God to grow in us an awareness of His voice is a huge success! And we have to start somewhere.

What if we realized the Creator of the universe, the God with a love so overwhelming that He died on our behalf, and the God of lavishing and incomprehensible grace wants to interact with us each day? He wants to have a genuine friendship with us! If that truth really sinks in, creating space becomes more of an adventure than a duty.

This is an invitation from somebody that is barely treading water in this department. With three kids, I rarely create space without the party being crashed by little feet. My goal is to receive God’s grace and keep trying. I invite you on the journey.